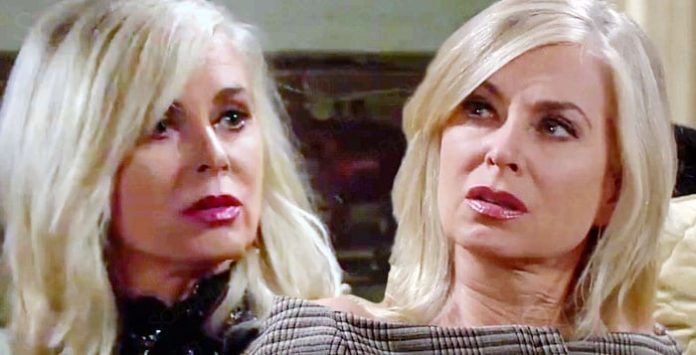 Ashley Abbott returned to The Young and the Restless to celebrate the birth of her daughter, Abby Chancellor’s son – and then to stick around when Abby dumped her baby on Devon Hamilton and hightailed it out of town to prove that presumed dead husband Chance Chancellor was still alive.

Young and the Restless: Move Back Home Ashley

While Victor Newman (Eric Braeden) and Devon (Bryton James) dither, Ashley (Eileen Davidson) announced that she was going after her girl. Good for you, Ashley! But, as soon as you find Abby, please hurry home. Because we have a lot of great ideas for what you can do once you’re back permanently:

Love With a Proper Stranger

We understand why Ashley keeps hightailing it back to Paris. Her romantic options are pretty limited in Genoa City. She’s related to Jack Abbott (Peter Bergman), the hottest eligible bachelor in her age group. And Victor, who all women are required to honor before moving onto somebody else, is a case of been there, done that – too many times.

Expand Your Young and the Restless Horizons

But that’s only if Ashley sticks to her age group. And since when does she do that? We still miss Ravi – a promising pairing that went nowhere. But it proved that Ashley has no problem with young men – or they with her.

Which makes us think about candidates like… Nicholas Newman (Joshua Morrow). He and Phyllis Summers (Michelle Stafford) just broke up. Which proves that he has no problem with strong women. He and Ashley could be intriguing…an interesting pairing that not only Victor but also Nikki Newman (Melody Thomas Scott) points out.

And then there’s the new mogul in town: Ashland Locke (Richard Burgi). Sure, their names are a little too matchy-matchy (no worse than Billy and Lily). Once he does something to upset the Newmans, they are going to circle the wagons to bury him. Having Ashley in his corner would be very beneficial. And a whole lot of fun!