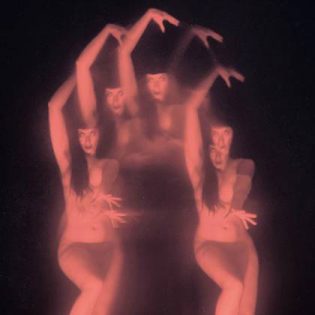 Now that synthwave has been fully embraced by the mainstream, thanks as much to STRANGER THINGS as to THE WKND, it feels like a good time to point out that the likes of PERTURBATOR, CARPENTER BRUT, and, in particular, GOST were always exceptions to the genre’s musical rules. A quick dalliance with the online world reveals that most synthwave amounts to variations on a rigid theme: ’80s computer game soundtrack bleeps, thumping four-to-the-floor beats, and squealing, cock-rock guitar solos. Check out the excellent JUDGE BITCH if that’s your thing. But those acts who found themselves quickly assimilated into the world of heavy music were never destined to have real crossover appeal. Instead, the wisest among them have either doubled down on the more abstract and dark elements in their music — see PERTURBATOR‘s recent “Lustful Sacraments” — or (as GOST demonstrate with a shit-ton of panache on “Rites of Love and Reverence”) they have evolved and mutated at such a rate that mainstream synthwave seems laughably out of date by comparison.

GOST was always the most metal-friendly of synthwave’s breakthrough acts. Metalheads were well catered for on earlier albums like “Non-Paradisi” (2016) and “Possessor” (2018), the second of which remains the moment when synthwave and extreme metal really became one, with still startling results. But founder and mastermind James Lollar has been on quite the evolutionary journey recently, and GOST has steadily morphed into what now feels like a real band. A more traditional songwriting approach and frequent tropes from gothic, electronic, and post-punk lore are all fundamental to the sound here, but “Rites of Love and Reverence” retains that sense of questing futurism that made GOST and their peers so appealing in the first place.

As with 2019’s watershed full-length “Valediction,” this feels like a strident act of reinvention but with stronger songs and a greater sense of cohesion. More importantly, Lollar‘s vocals no longer come as a surprise and now provide the grimly poetic glue that holds the whole enterprise together. He’s a deadpan but dramatic presence on “Bound By The Horror,” as a stuttering, overdriven industrial groove blends with tweaked-out, Hitchcock-ian string-stabs; while on “Coven”‘s hellish disco throb, he’s a sinister master of ceremonies, reveling in the moral perfidy erupting around him. In some parallel dimension, the stripped-down electro-pulse of “November Is Death” would be a massive global dance-floor smash, but on this doomed planet, it’s far too creepy and haunted by its own primal urgency. Likewise, “Embrace The Blade” has the jittery allure of mainstream pop in its veins, but berserk detours into a lurching, scattershot noise gives the game away as Lollar glitches out and sticks the knife in. Call these songs thumping goth-wave bangers if you must, but the darkness that drips from every beat and bleep is real enough. The mainstream can have synthwave. The night belongs to GOST.