SHE just scored a global hit with Bond theme No Time To Die aged just 18.

But for those of us already feeling wildly inferior Billie Eilish has just dealt another blow.

Only a year later the superstar singer has been confirmed as Glastonbury Festival’s youngest ever headliner for next summer – taking to the iconic Pyramid Stage on Friday June 24 when the world’s best live music event finally returns.

It means Billie will also be the first female to perform the top billing since 2016 – although Taylor Swift had been due to at the cancelled 2020 event.

Yesterday she hinted at the news on Instagram when she posted a photograph of herself in a Glastonbury Festival hoodie alongside the caption 2022.

And the event’s organiser Emily Eavis later confirmed the stellar booking, saying Billie – who will be 20 when she takes to the stage – was the “perfect” way to return.

She added: “We couldn’t be happier to announce that the wondrous Billie Eilish is headlining the Pyramid on the Friday at next year’s Glastonbury Festival, becoming the youngest solo headliner in our history.

“This feels like the perfect way for us to return and I cannot wait.”

And a source tells me: “This is a massive statement of intent, both for the festival and for Billie.

“Glastonbury is always evolving and recognising new trends, so giving her the top billing says she’s a huge reflection of what the music scene is all about right now.

“For her, it’s about cementing herself and her credibility on the biggest stage of all – and her team are incredibly excited about what she will do.

“There are already plans being made to pull out all the stops – they know this is a career defining moment for her.”

Billie previously appeared higher on the bill on The Other Stage in 2019 – when she was just 17 years old – in a performance lauded by critics as “once-in-a-generation” and “mesmerising”.

I was lucky enough to catch some of her set – which included tracks Bad Guy and You Should See Me In A Crown – and even saw her sit cross-legged on the stage and ask fans to lower their camera phones and enjoy the moment.

Since then she has won multiple Brit and Grammy Awards for her albums When We All Fall Asleep Where Do We Go and Happier Than Ever, before appearing at the Royal Albert Hall for the James Bond premiere last week.

But alongside the astonishing success, what’s arguably even more impressive is Billie’s genuine originality – the antithesis of dozens of other pop star clones who may look and sound sensational but rarely stand out from the crowd.

Here’s hoping she inspires a whole new generation of youngster to do entirely their own thing, too.

SAM Smith has raked it in over the years, but the singer landed the easiest payday ever when a casino heiress forked out a fortune for a set in Las Vegas comprised of a single song.

The British star was paid a whopping £250,000 to perform at Victoria Fertitta’s wedding to businessman Daniel Crowe in Sin City.

To top it off, all of Sam’s travel and accommodation costs were covered, so there was no reason to dip into the huge pay packet to get there or back.

A source said: “Sam’s performance at the wedding was top secret and guests were asked not to share any footage.

“Sam sang Stay With Me and it was a beautiful moment. Some people were in tears during the performance.

“Sam was paid a quarter of a million to do the one song but as far as the bride and groom were concerned, it was worth every penny.

“No expense was spared at the bash, as Post Malone was also booked to perform – and he sang at the reception.

“It has got to be one of the most expensive weddings of all time.”

In total, the extravagant wedding is believed to have cost an eye-watering £25million, although Victoria’s dad Frank – who forked out for it all – is believed to be worth £2billion.

The bash at the Red Rock Resort Casino and Spa was organised by famous party planner Mindy Weiss, whose other clients include the Kardashians and Justin Bieber.

The family are used to the high life though, with Bruno Mars and Seal performing at Victoria’s sister Kelley’s wedding in 2018.

The massive record sales and horde of gongs which Sam has won speak for themselves.

But paying someone just a few grand more than the cost of the average house in the UK is absolutely ludicrous.

Talk about more money than sense.

CARDI FINDS A SENSE OF PURPLES

IT’S three and a half weeks to Halloween but Cardi B and husband Offset already seem to be diving into their fancy dress box.

They were photographed out and about in Paris on Sunday night, where she dressed entirely in purple while Migo’s Offset did his best impression of a yeti in a big fluffy coat.

The couple were in town for Paris Fashion Week and have certainly been wearing some eye-catching looks.

But fans will be wondering when Cardi will stop spending her time dressing up and instead get a move on with her second album.

She released her debut, Invasion of Privacy, back in 2018 and although she has put out a slew of singles since then – and had two children – the follow-up is nowhere to be seen.

Cardi previously said she was aiming to release it in 2019, but motherhood and the pandemic seem to have stalled things.

At this rate, she will keep us waiting even longer than Rihanna.

THE SCRIPT are on track to land their sixth UK No1 album this Friday, thanks to their latest release Tales From The Script – Greatest Hits.

The Irish group’s collection, which I announced in Bizarre in August, features all of the hits from their 13-year career and is currently ahead of The Specials’ Protest Songs 1924-2012, which is also new in the mid-week chart update, at No2.

Elsewhere, Queen’s Roger Taylor is currently at No3 with his solo record Outsider, after three days on sale, while the soundtrack to new James Bond film No Time To Die, composed by Hans Zimmer, is at No4.

Farther down the chart, Lady Gaga and Tony Bennett’s album Love For Sale is at No6 while a 20th- anniversary reissue of Sugababe’s One Touch is at No7.

I THOUGHT that every celebrity and their dog had already launched their own podcast, but Little Mix have proved me wrong, because they are only just doing their own one now.

The trio have jumped on the bandwagon by announcing they have recorded a mini series called The Power Of Little Mix which will have a new episode every week after it launches next Monday via the Global Player and website Popbuzz.

Leigh-Anne Pinnock – who celebrated her 30th birthday yesterday when her fiance Andre Gray bought her this £95,000 Mercedes – Jade Thirlwalland Perrie Edwards will reflect on the band’s decade in pop on the podcast.

And it will drop just days after their ex-bandmate Jesy Nelson’s debut solo single Boyz, which is due out this Friday.

Each episode will focus on a two-year period in the history of Little Mix, kicking off with their formation at the bootcamp stage of X Factor with mentors Gary Barlow and Kelly Rowland in 2011.

Teasing the venture, Little Mix said: “So much has happened in the last decade! We hope everyone enjoys listening to it as much as we did recording it”.

The girls are also due to release their first greatest hits album, Between Us, next month to celebrate their 10th anniversary.

NICK Grimshaw has warned Jordan North not to try and co-host his drive time Radio 1 show with Vick Hope with a hangover.

The former party boy says he has learned from experience that the pain only gets worse as the day progresses and you are due on air.

Jordan, who is currently on tour with his Help I Sexted My Boss podcast, told me: “We had big shoes to fill – Grimmy is a legend and a lovely bloke.

But it’s going well. The listeners seem to like it.

“The only tip he gave us was don’t think you can do the show on a hangover as it starts at half three.

“He said when you are hungover on breakfast you just get up and do it. But with this it gets to half three, then four, and five o’clock and it gets worse.”

I’ve done my share of hungover shifts – in the past, of course – and know how painful it is.

But the thought of having beer fear while presenting to the nation would be enough to turn even me sober.

Give us a blue, Adele 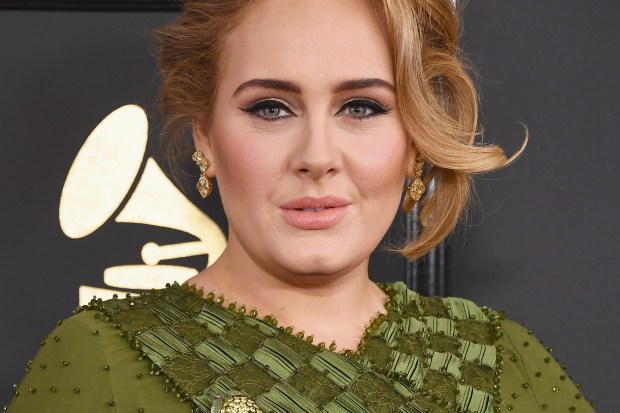 ADELE continues to tease her imminent return with an intriguing update to her social media channels.

Her website and social media features the same blue background as a series of billboards that appeared across the world at the weekend.

In a major ad campaign the number 30 is projected onto buildings and is featured on posters in major cities globally.

Fans are convinced 30 will be the title of her fourth album,despite the fact she is aged 33.

It’s rumoured the secretive star will drop the first single on Friday, before the album on November 19.

The countdown is on.

RITA ORA says she will not add to her 30-odd tattoos . . . unless it’s something “really special”.

Inkings all over her include a ballet dancer on her right tricep, smiley face on her right earlobe, heart on her little finger and dove on her neck.

The singer said: “I started in my early twenties. I’ve got around 30.

“Now I will only get something if it’s really, really important, like a memory or for somebody.”

Rita is 31 next month, and added: “I feel very calm, much more aware of myself.

“I do feel very confident and comfortable in my skin and that’s a very sexy thing.”