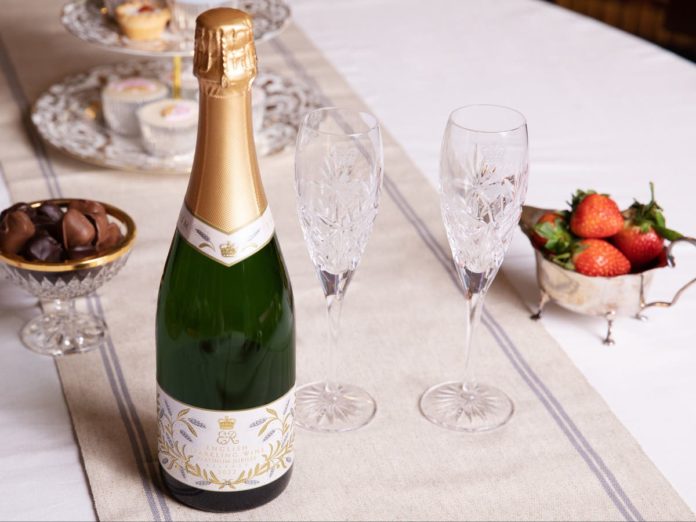 Bottoms up: Buckingham Palace has released its own sparkling wine

The Royal Collection Trust has released a special edition English sparkling wine in celebration of the Queen’s Platinum Jubilee.

The £39 bottle, which is on sale now, is a blend of Chardonnay, Pinot Noir and Pinot Meunier.

The Queen celebrated 70 years on the throne on 6 February, making her the longest-reigning monarch in British history.

She will commemorate the milestone with a long weekend of festivities from 2-5 June, including a Platinum Jubilee Pageant through London, a party at Buckingham Palace and the Queen’s birthday parade, Trooping The Colour.

The bottle’s label design is inspired by the gold embroidery on the Queen’s Robe of Estate, which she wore on her Coronation Day in 1953.

A crowned EIIR cypher is surrounded by golden olive leaves and ears of wheat to symbolise peace and plenty.

The 12 per cent wine, which in itself is gold in colour, is described as having “enticing aromas of rich and honeyed citrus fruit, white peach and hints of sweet spices”.

On its website, the Royal Collection Trust said the wine is best paired with mature English cheddar cheese, or seafood such as crab or langoustines.

Hand-cut champagne flute glasses, costing £120 a pair, have also gone on sale in honour of the occasion.

This week it was reported that the monarch had been in contact with the Prince of Wales two days before he tested positive for Covid-19 on Thursday 10 February.

The Queen is reportedly not displaying symptoms and is staying at Windsor Castle.

During her Platinum Jubilee message to the public on 5 February, the Queen said she hopes the Duchess of Cornwall will be known as Queen Consort when Prince Charles takes the throne.

She said in the written message: “I would like to express my thanks to you all for your support. I remain eternally grateful for, and humbled by, the loyalty and affection that you continue to give me.

“And when, in the fullness of time, my son Charles becomes King, I know you will give him and his wife Camilla the same support that you have given me; and it is my sincere wish that, when that time comes, Camilla will be known as Queen Consort as she continues her own loyal service.”