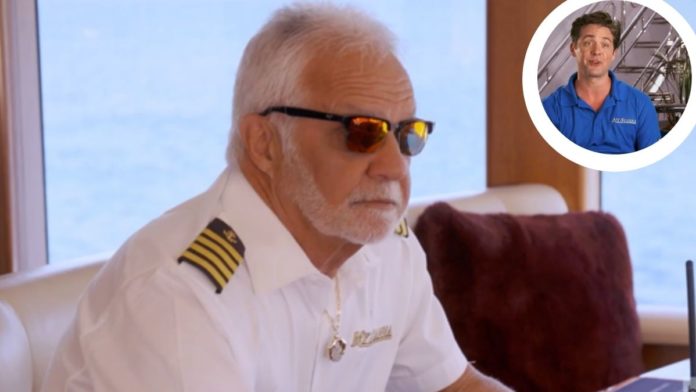 Below Deck star Captain Lee Rosbach urges Eddie Lucas to keep his emotions under control after the first officer lost it in the recent episode.

Eddie became unhinged at the many mistakes Jake Foulger, Rayna Lindsey, and Wes Odell made on deck. After weeks of the deck crew pulling off rookie moves, like not securing the cushions, Eddie is at his limit with the team.

Things got worse when Captain Lee came out on deck to help with the slide. It was chaotic for sure, with Eddie losing his mind. Then the captain pulled Eddie into the wheelhouse to calm him down.

Unfortunately, Rayna and Jake arguing so loud that guests could hear them only heightened Eddie’s anger.

In his latest blog, Captain Lee addressed Eddie’s temper flaring up and a couple of other issues. The captain was a little confused why Eddie had a problem with the new time the boat was leaving the dock.

“Not sure why you were having an issue with changing up the time but give yourself a chance to get used to it. We make a better impression on the guests, more tips, everyone is happy,” the captain wrote.

Perhaps if Eddie’s complaining were the only issue, Captain Lee would have stopped there. However, Eddie’s temper was definitely the hot topic the captain wanted to address.

“The slide operation isn’t that tough, though they are making it seem that way. Losing your temper didn’t help. And when I’m out there, with my radio in hand talking to people, I’m in charge. Everyone else needs to listen, not talk,” Captain Lee stated.

There’s no question that Eddie and Captain Lee are close friends. The captain is one reason Eddie returned to Below Deck.

Just because they are good friends doesn’t mean Eddie is immune from Captain Lee’s wrath or stern warnings.

“When you lose it, you do no one any good at all. It just makes matters worse, which is why I called you up to the wheelhouse to calm down a bit. You being rattled was becoming contagious. Watching your crew screw up is what put you over the edge, not me being there trying to fix it. You do much better when your emotions are under control,” the captain expressed.

The deck team had better things in check because Captain Lee Rosbach just might give them a plane ticket home.

If Eddie Lucas doesn’t watch his temper, he could be a goner too. The latter is unlikely, but Captain Lee shouldn’t have to tell his first officer to calm down.

Season 9 of Below Deck has been interesting, that’s for sure. Now things are getting heated between Eddie and his team. Plus, chief stew Heather Chase and Fraser Olender are butting heads with Jessica Albert.

Jess shared her side of the story on Watch What Happens Live. Fraser also shed more light on what was really going on with Jess and the interior crew.

Will Eddie listen to Captain Lee and put his temper in check?

Below Deck airs Mondays at 9/8c on Bravo.