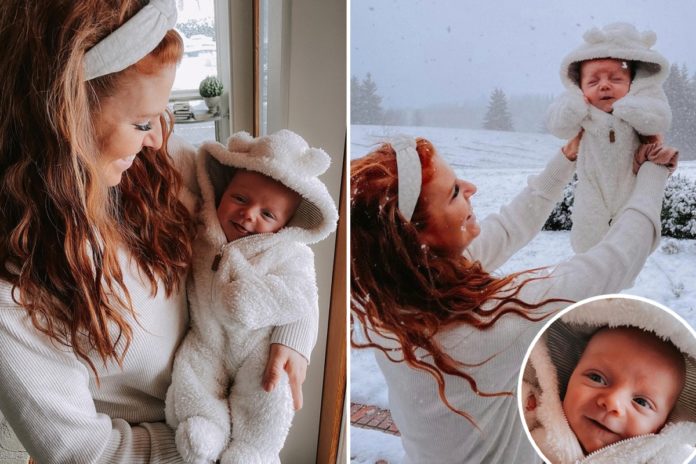 LITTLE People’s Audrey Roloff posed with her newborn son Radley after she was slammed for bathing him just twice in one month.

On Instagram, Audrey posed while cradling Radley in her arms.

He wore an adorable fuzzy onesie with tiny polar bear ears on the hood.

Radley squinted his eyes, stuck his tongue out, and smiled as Audrey, 30, held him up outside in the snowfall.

“For all the tongue issues this guy has had… that tongue sure is cute.”

Fans poured into the comment section to gush over how adorable Radley looks.

Earlier this month, Audrey faced backlash when she shared that she only bathed Radley twice since he was born.

Alongside an Instagram Story photo of Audrey holding a naked Radley, she wrote: “Dude has only had 2 baths in his life so far cause mama is holding on to that newborn smell.”

Fans were shocked about the confession, as many raced to Reddit to slam the mother of three for her parenting decisions.

“Holy crap. This is insanely disturbing,” one ranted.

“She is purposely posting controversial pics. No one can be this stupid. I think she loves negative attention. I think she is mentally ill,” a second suggested.

A third contributed: “Bath time can be a complicated issue but I really doubt she has this issue. She really needs to bath her kids.”

“Portland has some of the best tap water in the nation. It’s not hard water either. Audrey is mental,” a fourth explained of the family’s hometown.

“…would he not still smell like a newborn when he’s clean? I’m not a mom but I don’t think that’s an expendable scent that you can wash off? lol,” a final added.

Back in November, Audrey opened up about the pain and exhaustion in a revealing post about her postpartum experience.

She wrote: “Maybe it will be different this time.

“Maybe I’ll get through the first week of recovery without the dreaded M-word… I didn’t tear as bad. I didn’t hemorrhage this time.”

The TLC star continued: “My birth experience was so beautiful and peaceful and empowering. Those first few days postpartum I was so encouraged.”

While sharing the baby photos, she added: “This is what you hardly ever see on the other side of the screen.

“An overflowing postpartum nightstand with a very tired, hurting, recovering mama. Tears of joy as she swoons over her newborn baby and tears of pain as she aches in too many places to count.”

Audrey mentioned how people usually do not discuss the postpartum experience openly enough.

She wanted to remind other mothers that if their body “feels wrecked,” then they should know that they are not alone.

The TV personality had delivered her son in a bathtub and shared photos and a video from the experience over on social media.

Also in November, Audrey had shared an intimate clip of Radley’s water birth.

The clip also featured Jeremy as he cried during the birth of his baby boy.