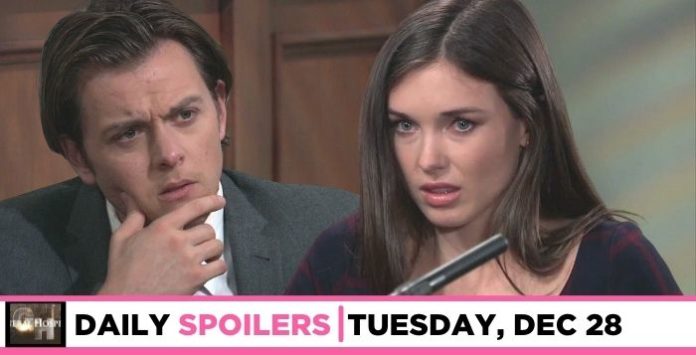 Michael Corners Willow Over Her Secrets

GH spoilers for Tuesday, December 28, 2021, reveal shocking news, gifts, questions, and so much more. You won’t want to miss a dramatic moment of this new episode.

Those in the Pennsylvania hearing room react to Willow Tait’s (Katelyn MacMullen) explosive testimony. Once alone, Michael Corinthos Quartermaine (Chad Duell) loses focus on how this could possibly blow up his parents’ marriage and instead predictably makes it about himself as he wants to know why Willow didn’t tell him what she knew. Cause, of course, she’s not allowed thoughts of her own.

Inside the courtroom, everyone is on pins and needles as Sonny Corinthos (Maurice Benard) is made to take the stand and is asked if he considers himself the victim of a crime. He has to weigh his answer carefully because one answer could spell the end of his marriage to Carly Corinthos (Laura Wright) — or send Nina Reeves (Cynthia Watros) to jail.

While Brook Lynn Quartermaine (Amanda Setton) babysits Leo, Ned Quartermaine (Wally Kurth) and Olivia Falconeri Quartermaine (Lisa LoCicero) go to General Hospital to hear the results of Leo’s evaluation. Olivia worries what if Leo needs something that she can’t give him. Back at home, Harrison Chase (Josh Swickard) wants to know how much of what she’s saying is her dad’s influence and how much is how BLQ is feeling.

They aren’t the only ones talking about feelings. Liesl Obrecht (Kathleen Gati) gives Britt Westbourne (Kelly Thiebaud) a belated holiday gift. They talk about how Liesl’s life has changed so much now that she’s fallen in love with Scott Baldwin (Kin Shriner) — and Liesl says who’s to say her darling Britta can’t have that too?

Curtis Ashford (Donnell Turner) wonders to Stella Henry (Vernee Watson) what else he doesn’t know about his father. He asks her what he doesn’t know about Marshall Ashford (Robert Gossett). She obviously knows a lot more than she’s spilling — will she ease Curtis’s mind and finally tell him some of the answers he’s looking for?

TJ Ashford (Tajh Bellow) comes to Shawn Butler’s (Sean Blakemore) defense — but who exactly is on the attack? Either way, it leaves the older man with a lot of questions as Shawn wants to know if his son is holding something back.

In case you missed these from last Friday, Soap Hub has your weekly General Hospital spoilers all in one place. They let you know what your favorite Port Charles power players will be up to in the days ahead. So be sure to get a jump on this week’s action by clicking here.