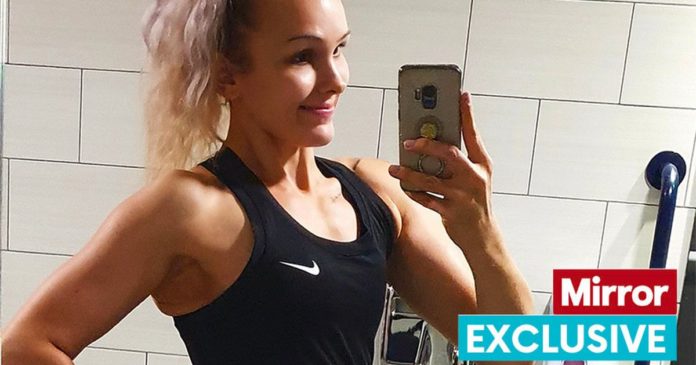 Louise Rodmere, 26, from Slough, changed her lifestyle in 2020 after getting tired out doing basic tasks – and although she’s made incredible progress, she has to deal with trolls who say she’s gone “too far”

Louise lost an incredible eight stone in a year (

A woman who lost eight stone in a year after getting out of breath walking up the stairs claims she now gets “skinny shamed” over her new, slender figure.

Louise Rodhouse, from Slough, weighed 19st 2lb at her heaviest, gorging on a large Big Mac meal, a double cheeseburger, a mayo chicken burger and a McFlurry for lunch.

But after the 26-year-old mum-of-two turned her life around and changed her habits, she now weighs 10st 8lbs and has gone from a size 22 to a size 8.

“The reason I stayed overweight for such a long time was because I would consistently overeat. I would eat when I was sad, happy or bored,” she said.

“I weighed 12st aged 12 – heavier than my mum. As I got older, I gave no thought to nutritional value or calorie content of food and lived a very sedentary lifestyle, with no interest in exercise or even just going for a walk.”

She explained her weight started to go up after she had her first baby in 2014 and continued to rise after giving birth to her second in 2018.

Louise added she had also been diagnosed with severe depression and had low self-esteem.

At the age of 24, Louise realised her size was starting to affect her daily life and she struggled to do basic tasks like tying her shoelaces. She was also getting out of breath walking up the stairs.

“I would never wear a top that showed my arms, even in hot weather, I would wear cardigans to cover them,” she said.

“I felt like I was stuck inside a bigger version of myself, and I like there was nothing I could do to change that, and it made me feel unhappy in myself.

“I had tried every diet you could think of in the past, but any weight I ever lost I would regain plus more because the diets I tried were not sustainable.

“As soon as I stopped the diet, the weight would come back.”

Her daily diet would usually see her skipping a proper breakfast, instead eating biscuits with a cup of tea. If she did have breakfast, it would be chocolate spread on toast or a fry up.

After indulging in McDonald’s for lunch, she would typically have a bowl of cheesy pasta or a takeaway for dinner.

She admits it was a health scare that caused her to change her diet once and for all.

“I was getting chest pain and heart palpitations. I was becoming very aware of how unhealthy I was, so I realised that it wasn’t just the way I looked anymore,” she explained.

“I went out for a friend’s birthday in January 2020 and the outfit I had got to wear ended up being too tight and the buttons kept popping open making me feel really self-conscious.

“That night I realised I was done feeling down and depressed about my weight. My health was clearly being affected and so was my mental health.”

After the night out, she started swapping her usual food choices for low-calorie options from The Skinny Food Co.

Louise has transformed her body in just one year
(

She said the swaps worked for her because they meant she could eat healthier versions of her favourite meals, like the Chinese Fakeaway.

“After my first week of eating healthier and moving more, going to the gym, and walking on the treadmill, I started getting less bloated and my mood started improving,” she said.

In August 2020, when lockdown was eased, she started weightlifting and hired a personal trainer. Now, Louise is eight stone lighter, healthier than ever and says her mental health has drastically improved.

She said: “The more I exercised the less depressed and anxious I felt.

“I was seeing the scale go down but also, I started going down dress sizes and I was always taking photos to compare which really motivated me.

“I didn’t ever want to give up because even after a month I felt so good and made so much progress.”

The mum-of-two says some people now “skinny shame” her
(

She claims commenters have “skinny shamed” her – but she tries not to let them get to her.

“On some level I don’t care as I’m happy with myself,” she said.

“I’m really proud of my transformation, and just when I was really excited, I got these hurtful comments. But I just think some people are going to be negative whatever your size.”

Louise stresses she’s never had surgery and says she hides her loose skin under her clothes.

Louise said: “I didn’t start my weight loss by doing a workout programme or strict eating plan. I made changes over time and gradually increased my activity.

“During lockdown I got a Fitbit and focused on going for walks and then eventually joined a bootcamp that I went to once a week.”

Now she’s down to a healthier weight, Louise enjoys going for long walks and rarely gets worn out.

She’s set herself a goal for the New Year to compete at the Pure Elite bikini modelling competition in the Transformation Category in April 2022.

Have you had an incredible body transformation? Email [email protected]

Louise said: “I am very proud of my body and what it has been able to do. When I look in the mirror I see a body that has carried and birthed my two beautiful boys and a body that used to carry an extra 120lbs of fat.

“I am so grateful to my body for being able to adapt to weight loss so quickly and I see how much stronger it has become from strength training.”