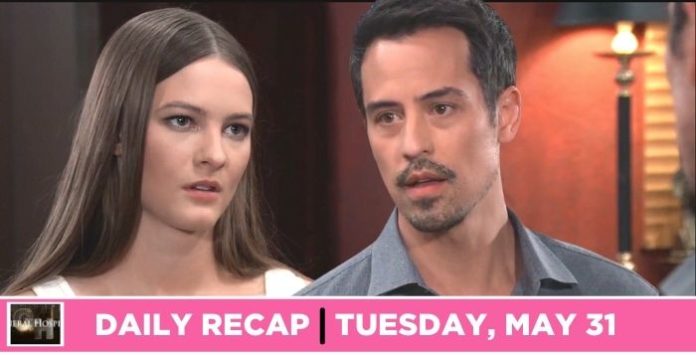 Nikolas Crosses The Line With Esme

The GH spoilers recap for Tuesday, May 31, 2022, features Nikolas Cassadine doing something very, very dumb just as his mother tried going to bat for him.

Nikolas (Marcus Coloma) had no trouble letting an underage Esme Prince (Avery Kristen Pohl) drink to her heart’s content in his living room while she told him that if his wife doesn’t put him first, then maybe he should find someone who will. Esme also made sure to be wearing a short leather skirt and midriff top as she batted her eyelashes, allowing Nikolas to put a jacket around her shoulders for warmth.

After hearing Nikolas say he didn’t want to talk about his marriage anymore, Esme went in for the kill and declared that he is a man who deserves respect and that Ava Jerome Cassadine (Maura West) should put all her feelings aside for him. He then told her he wanted her to stay, right then and there. When Esme asked him to prove it, he pulled her in for a passionate kiss, apparently forgetting she is a teenager.

Meanwhile, Laura Collins (Genie Francis) and Ava bonded at the shooting range. Laura tried to get Ava to see Nikolas loves her by telling her that Nikolas asked Laura to write a letter of recommendation for Avery Corinthos so she could go to a prestigious school. Ava lamented that there is no trust between her and Nikolas. Laura pointed out that there is love and where there is love, there is hope.

As the nature vs. nurture debate continued surrounding Nelle Benson (Chloe Lanier) being as crazy as Nina Reeves (Cynthia Watros) and Nina being as crazy as Madeline Reeves (Donna Mills), Willow Tait (Katelyn MacMullen), granddaughter of Madeline and daughter of Nina, may have put that argument to bed when she lost it on the woman she doesn’t know is her mother.

Although Nelle was not the person looking for visitation, Willow brought up that very heinous act of Nelle using Willow’s dead baby to present to Michael Corinthos (Chad Duell). Nina said Nelle grew up abused and wished she could have raised her to be better but Willow just told her Nelle was a product of nature and DNA. She also told Nina she looked ridiculous wearing those heart pendants because Nina is heartless. That caused Nina to be the better person and silently walk away.

Willow soon took the stand and announced she would lay down her life for Wiley and she can’t allow Nina near the child because she played an active role in breaking up Michael’s parents. Great argument, Willow.

The Metro Court pool was the scene for a Society Setups meet and greet where we are sure some people really hooked up, but it was none of our favorite characters. Britt Westbourne (Kelly Thiebaud) lamented the sad state of her life to Drew Cain (Cameron Mathison) while Harrison Chase (Josh Swickard) told Dante Falconeri (Dominic Zamprogna) that Brook Lynn Quartermaine (Amanda Setton) confuses him about the state of their relationship.

Sam McCall (Kelly Monaco) looked lovely in a flowered dress rather than all black or jeans and T-shirts but was very curious as to why Damian Spinelli (Bradford Anderson) seems to have a whole new wardrobe for every occasion. Spinelli didn’t want to answer Sam’s questions.