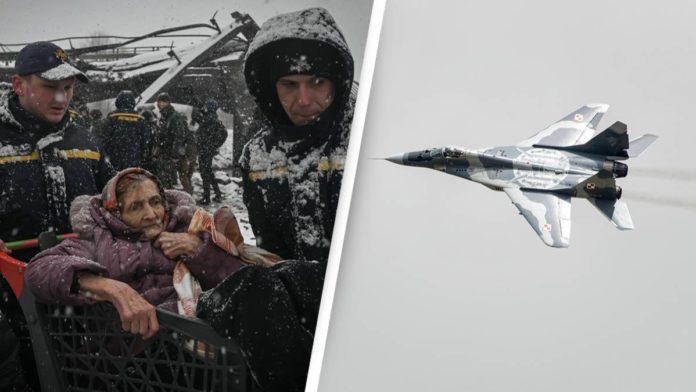 Poland’s Ministry of Foreign Affairs has announced that it will be giving all of the country’s MiG-29 jets to the US in support of Ukraine.

The Polish government department revealed the decision today, March 8, saying the plan was made off the back of conversations with the president of Poland, Andrzej Duda, and the rest of the country’s government.

All of Poland’s MiG-29 jets will subsequently be deployed to the Ramstein Air Base, a site owned by the US, located in Rhineland-Palatinate in southwestern Germany.

The Ministry of Foreign Affairs of the Republic of Poland said the planes were ‘ready to deploy’.

A statement released onto its website reads: ‘The authorities of the Republic of Poland, after consultations between the President and the Government, are ready to deploy – immediately and free of charge – all their MIG-29 jets to the Ramstein Air Base and place them at the disposal of the Government of the United States of America.’

However, it explained that ‘at the same time’ the country ‘requests the United States to provide [it] with used aircraft with corresponding operational capabilities’.

‘Poland is ready to immediately establish the conditions of purchase of the planes,’ it said.

🚨 BREAKING: Poland has announced it will immediately transfer all its MiG-29 jets to the US.

Looks like Ukraine about to get a whole load more fighter jets, in major development.

While the Polish government department has called on allies of the National Atlantic Treaty Organisation to follow suit and hand over their planes to the US, it is uncertain how many countries will do the same.

NATO has come under fire from Ukrainian president Volodymyr Zelenskyy for its refusal to not impose a no-fly zone above the country.

UK Defense Secretary Ben Wallace told Sky News this morning that while the UK would “support” Poland’s decision to supply Ukraine with fighter jets, he warned that doing so could put Poland “into direct line of fire from countries such as Russia or Belarus.”

Reflecting on Poland’s announcement, former director general of the think tank Royal United Services Institute (RUSI) and security and defence analyst, Michael Clarke, told Sky News: ‘The main thing as far as NATO is concerned is to get some aircraft into Ukraine that they can use.

‘The MIG-29 is not the best aircraft around at the moment but it’s better than nothing. NATO has been giving arms openly to Ukraine – this is just another type of weapon. […]The main thing is for Ukrainian pilots to find a safe way to take the aircraft into Ukraine.’

He noted that the move also signifies Poland’s redirecting of Russia to the US if it ‘want[s] an argument’ about the jets.

Poland says it’s ready to exchange all its MIG-29 fighter jets for US equivalents.
That would equip the US with jets that Ukrainian pilots can fly.
US could then help Ukraine impose its own no fly zone by gifting the jets to 🇺🇦air force
Big question is how Moscow would view this

In a news conference held today, Poland’s prime minister Mateusz Morawiecki said that while Poland is supporting Ukraine, the country does not intend to get directly involved, Reuters reports.

He stated: ‘Any decisions on delivering offensive weapons have to be taken by the entire NATO and on a unanimous basis.

‘This is why we are ready to give all of our fleet of jet fighters to Ramstein, but we are not ready to make any moves on our own because, as I said, we are not party to this war.’