IF the Ryder Cup was won in the car park, Europe would have stuffed America already.

When I spoke to him the other day, he started rattling through what his team-mates drive compared with the Yanks.

Rory McIlroy has a Ferrari LaFerrari. Ian Poulter has a ridiculous collection of classic Ferraris including a 275 GTB and a 288 GTO. Tyrrell Hatton has a purple Lamborghini Huracan. Sergio Garcia has a Mercedes CLK 63 DTM. And we’ll come to Casey’s toy box in a bit.

What I thought was going to be a ten-minute chat with Casey – that’s what the agents normally enforce – soon turned into an hour nattering about cars.

I know my onions but I wouldn’t do a Porsche-based pub quiz against this guy. There’s nothing you can tell him that he doesn’t know already.

His daily runner is a Cayenne Coupe. “That’s the Labrador. That’s the family dog.”

Parked next to that is a beautiful 1968 short wheelbase 911L.

“I had a Ferrari 430 Scuderia and sold it because I wasn’t in love with it. So I bought that and a couple of other things.”

“Rod Emory built it. Guys would just turn up at the racetrack and rent his ’65 for the day and slide it around.

“I bought it during the pandemic lockdown. I was like, ‘Ooh, what should I do?’ So I went down that rabbit hole of trying to source a 2-litre race car.”

Have you done any racing?

“It’s a dream. This is fast forwarding but I’d love to do something like the 2-litre Cup in Europe one day.

“That’s my idea of motorsport fun. I’m not about to break any records or anything like that but I do like my motorsport.”

I told you he knows his stuff.

“I had a Cayman GT4 but I sold that. So I need to replace that. I’m like any car person. You sell one to buy another. We’re currently doing some inspections on a 356 Speedster. Not a cab, not a convertible, we’re going full Speedster.

You know a man really, really loves European cars when he’s lived in Arizona for 25 years and hasn’t owned anything American.

“Somebody was texting and driving and ran into the back of it and wrote it off.”

What does your missus drive?

“She’s got a big family wagon but it’s not American either. It’s a Hyundai Palisade, which she absolutely loves.”

The three-time Ryder Cup winner said: “I had a poster of a 959 on my wall as a kid. It was silver. It was perfect. So there was always a love there. But my relationship with Porsche is authentic, plain and simple.

“I spend my own money on them. I drive them. I know a little bit about them. Start throw- ing numbers at me and I’m not too bad.

“I’m very aware of how lucky I am and I pinch myself every time I open up the garage.

“I don’t buy them to show off. I buy them to drive because I love them. I feel I’ve worked hard and I’m allowed to spend my money on them.”

He’s come a long way since tooling around McDonald’s car park in a Citroen AX Splash.

Even Schauffele wouldn’t drive that.

Ryder Cup stars and their cars

TEAM Europe has a pretty strong car game. Casey gives us a rundown:

“We’d have a great car park wouldn’t we? Westy would probably turn up in a G-Wagen or an Overfinch Range Rover or something like that.

“So would Rory. Actually, Rory’s got a LaFerrari.

“I might go classic . . . no, I’d probably call up Porsche and ask to steal the new GT3 for the week.

“What does Poults really love? Probably his 280 GTO. Sergio has had some cool stuff. Remember the old CLK Black Series? I had one of those. He had the DTM version. Sneaky.

“Tyrrell Hatton used to live in his parents’ house and he had a Lamborghini Huracan in a purple wrap.”

Casey said: “DeChambeau turns up with some lovely Bentleys. I love a Bentley. Phenomenal. But I don’t know if he’s a car guy.

“Xander Schauffele’s a brilliant player and he’s a lovely lad but he might just have the worst car. I think he still drives around in his 20-year-old Toyota Camry.

“His old man’s got a Porsche C2S. He loves it. But Xander’s just not interested.”

Bubba Watson didn’t make the American team but his car collection includes General Lee from The Dukes Of Hazzard. Class.

PORSCHE 911 GTS… PAUL CASEY WILL WANT THIS NEXT 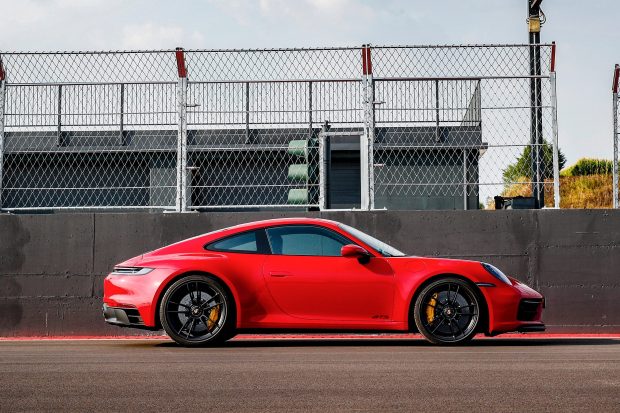 HERE’S a new Porsche that is almost certainly already on Casey’s radar – the 911 GTS.

HERE’S a new Porsche that is almost certainly already on Casey’s radar – the 911 GTS.

It’s the sweet spot between the pretty spicy Carrera S and the stroke-causing Turbo.

With 480hp on tap, the GTS has all the shove you could ever need but isn’t so brutal that you need your own runway to get out of second gear, which you most definitely do with the Turbo.

The beauty of the GTS is it has nicked all the top-slot engineering goodies from the Turbo, which means it has better brakes, some trick suspension and centre-lock wheels. It’s more of a budget Turbo than it is an expensive Carrera S.

Porsche is in danger of over-complicating the 911 range in my opinion, and it’s not helped by the fact the GTS can be had as a Coupe or Cabriolet, as well as the Targa with the retracting hard roof.

Once you’ve chosen your body style you’ll have to decide whether you want rear-wheel drive or all-wheel drive, and if you want to add rear-wheel steering and a lightweight package that shaves 25kg by removing the back seats.

That’s a lot to think about before putting your deposit down. Nice problem to have, though.

For me, the “entry” £110k Coupe with rear-wheel drive is all the car you would ever need. Porsche will try to get you to spend more money on things like carbon fibre bucket seats and a GTS-specific interior package, but that’s like daubing some glitter on the Mona Lisa and calling it an improvement.

The 911 is already a masterpiece, no need for all that nonsense.

The GTS is the 911 which can do it all, the over-achiever in a class of gifted students.

The speed and accuracy at which it turns feels supernatural, and once you’ve got the wheels flat enough for a burst of full acceleration the power hike over the Carrera S is obvious (30hp if you’re wondering).

But if you don’t want to work the car hard it just as happily wears the hat of relaxing grand tourer – just flip it back to Normal Mode and enjoy the soundtrack from that 3-litre flat-six.

The GTS is the car that makes you understand why Porsche fans are so adamant the 911 is the best car in the world.