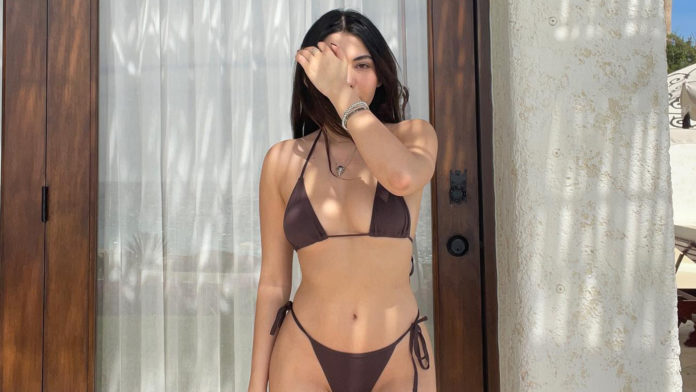 With guests gathering in Italy this weekend for round three of the Kourtney Kardashian and Travis Barker wedding celebration, the famous reality family is expanding, and that includes new faces appearing on their new Hulu show.

Along with marrying Travis, Kourtney is also becoming a step parent to the rock star’s brood.

But the Blink-182 drummer also has a fatherly relationship with Shanna’s daughter Atiana De La Hoya, whom she shares with her boxer ex Oscar De La Hoya.

And now, Atiana is making her big Kardashian’s debut on their new Hulu series.

The 23-year-old is seldom seen in public, and does not have an overly active social media presence, only posting intermittently.

Still, proving she will likely fit in just fine with her new family, the model does enjoy posing in revealing bikinis for Instagram.

Atiana was born in March 29, 1999 in Los Angeles, California and has worked as a model since the age of 14.

In 2021, the model was able to secure her first magazine cover story with Galore.

Besides being a model, she uses her impressive artistic skills to customize designer clothes and accessories.

On the most recent episode of their new show, Kourtney revealed her thoughts on having a “blended family.”

“I love the idea of a blended family,” Kourtney, 43, gushed during the Thursday, May 19, episode of The Kardashians. “The more kids, the merrier. It’s more people to love. I am really close with Travis’s kids and I love them. It’s a beautiful thing.”

During the latest episode, the Poosh.com founder gushed about her new huby’s role as a dad:

“Travis is really an amazing father,” Kourtney shared. “It’s one of the reasons I fell in love with him.

He is very, very patient. I think because we’ve all known each other, it does make it easier to blend our families. It’s all I could ever want.”

But there is always room for more, and Kourt and Travis’s quest to get pregnant have been well documented.

However, the quest has been a struggle, and thus far proven fruitless.

“Travis and I want to have a baby, and so my doctor took us down this road of doing IVF,” Kourtney said in a confessional during a new clip from the Hulu series The Kardashians.

“Like, it hasn’t been the most amazing experience,” she added.

Plenty of fans have been speculating Kourtney is expecting, a theory that has gone on for months, however, the star isn’t exactly happy about the rumors.

“It’s so rude to comment on people when you have no idea what they’re actually going through. The medication they’re giving me, they put me into menopause. … Literally into menopause.”