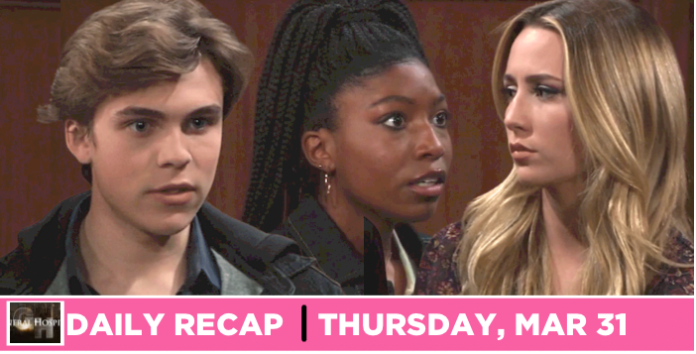 Trina Has A Major Decision To Make

The GH spoilers recap for Thursday, March 31, 2022, features the troops rallying around Trina Robinson trying to convince her of what to do when the judge asks what she pleads.

Trina (Tabyana Ali) arrives in court with Portia Robinson (Brook Kerr) and Curtis Ashford (Donnell Turner) and it turned out Molly Lansing Davis (Haley Pullos) was going to help prosecute her case. This was not something Molly wanted and told Trina to take a plea deal with a misdemeanor charge and no recommended jail time.

Scott Baldwin (Kin Shriner) told her he is almost sure he can get her off if they go to trial, but almost isn’t good enough. Portia just didn’t want a guilty plea to ruin Trina’s future. When Josslyn Jacks (Eden McCoy) and Cameron Webber (Will Lipton) stopped by, Cam wanted her to take the plea, while Joss tried to convince her friend to fight.

Over at Charlie’s, Spencer Cassadine (Nicholas Alexander Chavez) told Esme Prince (Avery Kristen Pohl) he didn’t think she made the sex tape and he believed her over Trina. Esme was thrilled and even more elated when Nikolas Cassadine (Marcus Coloma) agreed to let her and Spence live at Wyndemere again.

We now know Harmony Miller (Inga Cadranel) is not Willow Tait’s (Katelyn MacMullen) real mother, but that she is a murderer. However, she doesn’t want anyone to know that so she visited Alexis Davis (Nancy Lee Grahn) trying to gear her mind away from the fact that Harmony once wandered her house, ostensibly to hurt Kristina Corinthos (Lexi Ainsworth), but really so she could kill Neil Byrne (Joe Flanigan). To that end, Harmony told Alexis she would be going to bat for Nina Reeves (Cynthia Watros). Later, when Harmony was gone, a familiar face showed up at Alexis’s office and it looked to be Neil Bryne’s brother, Brendan Byrne (Josh Coxx).

When Harmony popped up again, she was at the Metro Court with Michael Corinthos Quartermaine (Chad Duell) and Willow, who had just met with Diane Miller (Carolyn Hennesy) regarding what Nina might do. Harmony did indeed go to bat for Nina, but it didn’t work. Willow even knew Nina must have put her up to it.

There was more drama in yoga class because Carly Corinthos (Laura Wright) and Nina keep picking the same one. As Sam McCall (Kelly Monaco) and Carly discussed the pitfalls of raising daughters in a still-male-dominated world, Nina told Maxie Jones (Kirsten Storms) she wanted to reason with Carly.

All Carly did was sneer and snarl at her while Nina brought up the fact that they united to talk Gladys Corbin down from the proverbial ledge a few weeks ago. That meant nothing to Carly, who walked away in disgust, causing Nina to walk out of the yoga class.