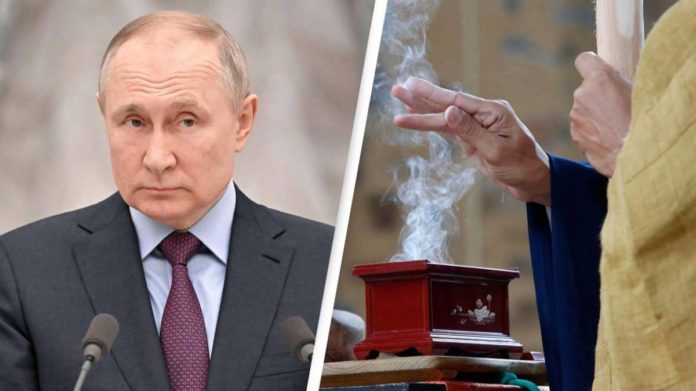 More than a dozen witches in Ukraine have revealed plans of a ritual intended to oust Russian president Vladimir Putin following his invasion of the country.

News of the ceremony was shared on the Instagram page of a witch cauldron shop based in the capital city of Kyiv, with those behind the post explaining their plan was made up of three stages.

The ritual is set to take place on 31 March, exactly five weeks after Putin ordered troops across the Ukrainian border and on ‘the 29th lunar day’.

The witches described the day as one of ‘corruption and curses’ in their post, which was shared by Ukraine’s UNIAN news agency.

They wrote: “We, the witches of Ukraine, in collaboration with foreign partners, will perform a ritual of punishing the enemy of the Ukrainian people – Vladimir Putin.”

So far 13 people who describe themselves as witches have expressed interest in taking part in the ritual, which will begin at Ukraine’s ‘place of power’, thought to be Bald Mountain outside Kyiv.

The mountain, dubbed Lysa Hora in Ukrainian, is known for its connection with the occult, and folklore suggests witches would gather there for Sabbath ceremonies while joined by crows, eagles and paranormal creatures, Atlas Obscura reports.

The second stage of the ritual will be held in what is described as a ‘Slavic country’ in cooperation with the earlier mentioned ‘foreign colleagues’, before concluding with the creation of a ‘stone sack’ for Putin, who will supposedly then face ‘isolation, ousting from power and loss of support from the inner circle’.

It’s unclear exactly what the witches will do at each location to reach their goal, though they later admitted their ‘enemy’ had ‘strong protection’.

In a follow-up Instagram post, the witches warned the ritual could backfire and harm those who have decided to take part, but they still stressed their plans to go ahead with it and insisted they ‘know what they are doing’.

They assured: “Our rite has been developed by a team of serious practitioners from day one. We are ready. We did a lot of preparatory work, breaking through the defenses of enemies, carefully planning and selecting rituals.”

The witches have not revealed when their ritual may start to take effect, so only time will tell whether those involved will prove successful with their plan.