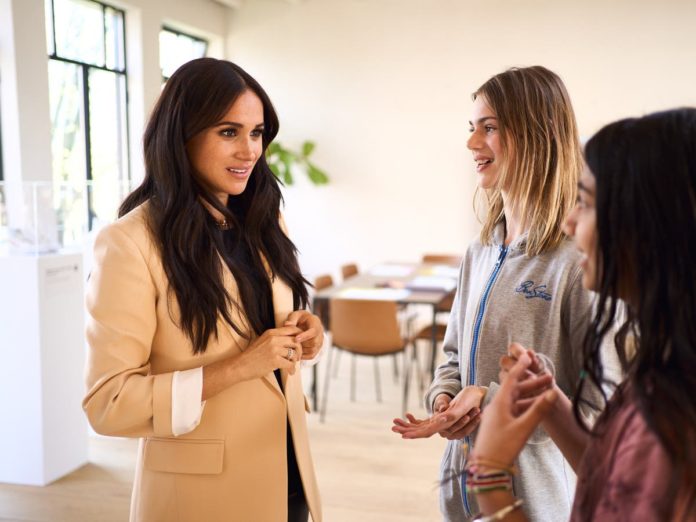 Unseen images of the Duchess of Sussex have been released to celebrate her work with Dutch non-profit, Project Fearless.

Founded by Merida Miller in 2019, Project Fearless aims to equip girls and non-binary children between the ages of nine to 14 with life skills to succeed in any aspect of their lives.

This can range from after school courses, to skateboarding, kick-boxing, and entrepreneurship. Project Fearless now works with 750 girls and non-binary children in Amsterdam.

The non-profit first joined forces with Meghan Markle in 2019, and has recently marked three years of work with the Duchess.

The images show Meghan during a visit to its Amsterdam headquarters earlier this year, where Meghan joined Project Fearless’ first entrepreneurship course as a guest coach and gave feedback on the girls’ sustainable business pitches.

Miller said of the visit: “The Duchess’ visit was a brilliant way to celebrate the impact Project Fearless has made over the last three years, introducing the girls to an accessible role model who is making a difference and using her voice.”

In a statement, Meghan said: “Safe, supportive spaces like Project Fearless allow girls the opportunity to express themselves, build each other up, gain resilience, and tackle new challenges.”

While it is not confirmed when Meghan made the visit, the Duchess was in the Netherlands in April for the Invictus Games, the annual sports event for military veterans founded by Prince Harry.

The images come a week after Meghan and Harry visited the UK for the Queen’s platinum jubilee, which celebrated the monarch’s 70th year on the throne.

The Duke and Duchess of Sussex took part in the Service of Thanksgiving on the Friday of the jubilee bank holiday weekend, as well as attending some private celebrations across the weekend too.

An image of the couple’s daughter Lilibet was released on social media following the visit, to mark the youngster’s first birthday which was on Saturday 4 June.

Britain, take your knee off our necks; Nigerians can no longer breathe