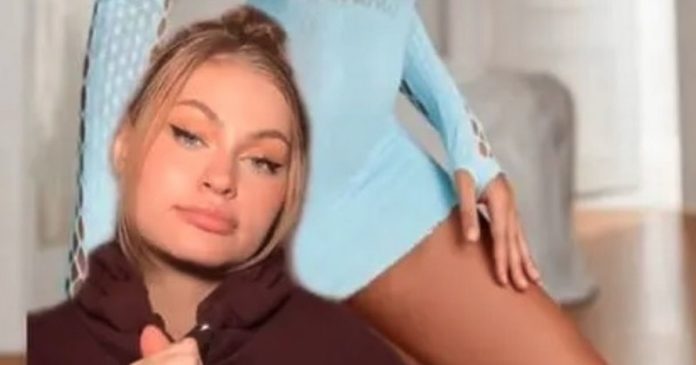 A TikTok user known for her twerking videos looked unimpressed when she bought a dress online, only to discover it looked tiny in real life.

In a video, Krimi @thekrimi shows a photo of the model wearing the blue minidress and then jump cuts to herself holding it up.

People joked the dress was so minuscule in her hand it looked like a “pair of tights” and one viewer asked if it was “just one sleeve”.

Krimi went ahead and tried on the dress and it turned out it was made from a stretchy material – but almost everyone out of the 800,000 people who watched the video seemed to think the same thing.

“It’s not that bad. It is just so transparent,” said one user.

“OK but we love the fact that it’s still fit and you look so amazing,” said another viewer, sounding very impressed.

A fourth told her: “Bruh what were you complaining about I really don’t get it, obv it’ll look small when you don’t wear it, it’s literally stretchy.”

“How did you make that dress look good?” said someone else.

Krimi’s thigh tattoos show through the sheer material and some viewers believe the dress is designed “for the bedroom” rather than an outfit for going out, although they agreed she looked great in it.

This comes after a woman was gobsmacked after trying on an “optical illusion” of a PrettyLittleThing dress that is supposed to make wearers look like they have a bigger bum.

She joked her backside looked like a “dump truck” in the dress and many viewers showered her in compliments and said it suited her.

Meanwhile, another woman recently discovered her tattoo has an X-rating meaning used as a code by kinksters who enjoy swinging.