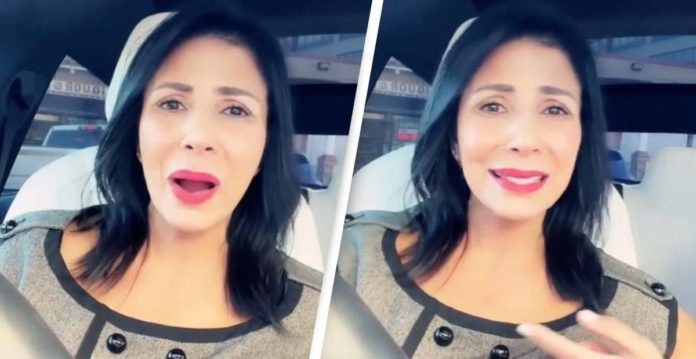 A TikTok user left viewers baffled after she recalled the unexpected interaction she had with her date’s dead mother during their first meeting.

Most people have a story of a strange date in their relationship history, though Pattie Ehsaei’s is up there with the most surprising.

The TikToker shared her story in response to another user who asked her viewers to share their ‘worst first date’, explaining things actually got off to a positive start on her blind date when she met a ‘Christian Grey’ type – without the sexual fetishes – who was tall, dark and handsome.

Hear Ehsaei describe her date below:

The pair spent the evening engaged in good conversation, though Ehsaei noted he did speak about his mum a lot, and he later went as far as to invite her to meet his mother, who he claimed ‘never sleeps’.

Though her gut told her otherwise, the TikToker decided to listen to her brain, as it told her the man loved her ‘so much’ that he wanted to introduce her to his family. After agreeing to the meeting, the pair drove 45 minutes to a ‘magnificent’ house, and the man led Ehsaei through the home to the pitch-black back garden.

Ehsaei admitted she was somewhat fearing for her life at this point as the mother was nowhere in sight, but they soon came to a stop in the garden, at which point the man proceeded to make introductions.

The TikToker recalled realising she was standing in front of a gravestone, and that the man’s mother was buried in the garden of his home. Unsure how to naturally bring the bizarre situation to an end, Ehsaei opted to go along with things and talked to the gravestone for ’15 minutes’, all the while ‘acting like it was totally normal’.

After having what I assume must have been a very one-sided chat with her date’s mother, the pair finally drove back to the city, at which point Ehsaei made it clear that they would not have a future together.

A number of TikTokers responded to the video to suggest the man was struggling with his grief, though some have noted he should have alerted Ehsaei to the fact his mother had passed away before introducing her to his gravestone.

Whatever you may think of the date, it certainly makes for an interesting tale.